The Wrath and Aftermath of Hurricanes

What are the Implications for Heartworm Infection? 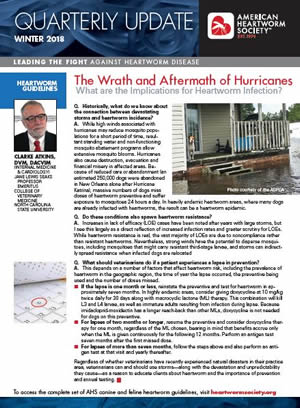 Q. Historically, what do we know about the connection between devastating storms and heartworm incidence?
A. While high winds associated with hurricanes may reduce mosquito populations for a short period of time, resultant standing water and non-functioning mosquito abatement programs allow extensive mosquito blooms. Hurricanes also cause destruction, evacuation and financial misery in affected areas. Because of reduced care or abandonment (an estimated 250,000 dogs were abandoned in New Orleans alone after Hurricane Katrina), massive numbers of dogs miss doses of heartworm preventive and suffer exposure to mosquitoes 24 hours a day. In heavily endemic heartworm areas, where many dogs are already infected with heartworms, the result can be a heartworm epidemic. 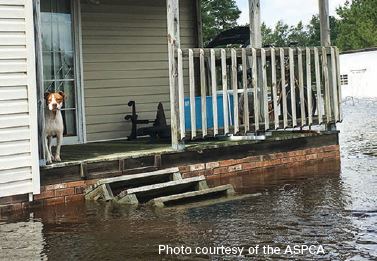 Q. Do these conditions also spawn heartworm resistance?
A. Increases in lack of efficacy (LOE) cases have been noted after years with large storms, but I see this largely as a direct reflection of increased infection rates and greater scrutiny for LOEs. While heartworm resistance is real, the vast majority of LOEs are due to noncompliance rather than resistant heartworms. Nevertheless, strong winds have the potential to disperse mosquitoes, including mosquitoes that might carry resistant third-stage larvae, and storms can indirectly spread resistance when infected dogs are relocated

Q. What should veterinarians do if a patient experiences a lapse in prevention?
A. This depends on a number of factors that affect heartworm risk, including the prevalence of heartworm in the geographic region, the time of year the lapse occurred, the preventive being used and the number of doses missed.

Regardless of whether veterinarians have recently experienced natural disasters in their practice area, veterinarians can and should use storms—along with the devastation and unpredictability they cause—as a reason to educate clients about heartworm and the importance of prevention and annual testing.