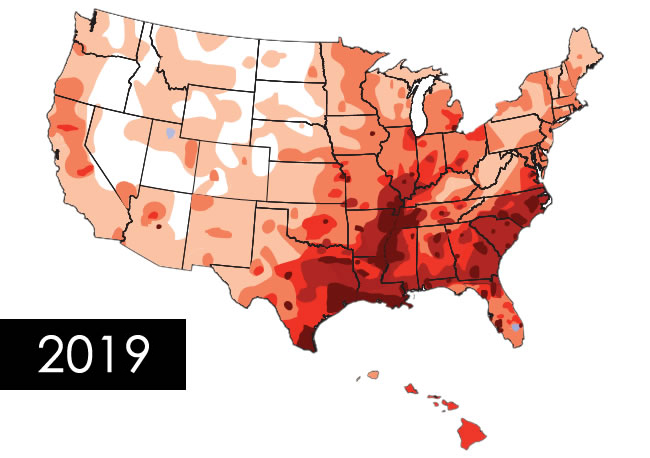 No State is Heartworm Free

Wilmington, DE (April 20, 2020)— The American Heartworm Society (AHS) announced the results of the 2019 AHS Heartworm Incidence Survey and unveiled a new heartworm incidencemap drawn from the data of nearly 6,000 U.S. veterinary practices and shelters last year. The conclusion: in spite of the challenges of the current pandemic, 2020 is no time for veterinary practitioners to deemphasize the importance of heartworm prevention.

Mississippi and Louisiana lead the country in heartworm infection rates
No state in the U.S. was heartworm-free in 2019, according to the AHS survey, which determined that the top five states in heartworm incidence were Mississippi, Louisiana, South Carolina, Arkansas and Alabama—all states that have been in the top tier since the AHS began tracking incidence data in 2001. In Mississippi, almost 10 percent of dogs tested for heartworms were heartworm-positive in 2019; in Louisiana, just under 8 percent of dogs tested were positive.

Rounding out the top ten states were Texas, Tennessee, Georgia, North Carolina and Oklahoma. Texas and Tennessee both dropped out of the top 5 ranking between 2016 and 2019, with Alabama and South Carolina moving up. Florida, meanwhile, fell off the top-10 list and was replaced by Oklahoma.

“When veterinarians compare the 2016 heartworm incidence map to the 2019 map, it’s clear that the big picture hasn’t changed,” said AHS president Chris Duke, DVM. “The Southeast remains a hotbed for heartworm infection, but states in the Northeast, Midwest and West have continued to see many cases as well.”

Dr. Duke noted that incidence trends typically vary from year to year due to factors such as weather conditions. “Droughts can lead to declines in infections, while weather events such as hurricanes can trigger incidence spikes as a result of exponential growth in mosquito populations,” he noted. “Meanwhile, the movement of pets from heartworm-endemic areas of the country to less-endemic areas can be problematic if guidelines on transport of heartworm-positive animals are not followed.”

AHS survey cites insights behind the numbers
The AHS Heartworm Incidence Survey is conducted every three years, using data from animals tested over the previous 12 months. The 2019 survey reflected data from more than 5.5 million heartworm tests conducted over the course of a year.

Meanwhile, the survey polled veterinarians on trends noted in the previous three years. Findings from that survey included:

COVID-19 crisis punctuates need for heartworm vigilance
While the COVID-19 crisis has temporarily limited the ability of many veterinary practices to conduct routine patient health screenings, Dr. Duke stressed that a temporary delay in heartworm testing in 2020 should not lead to lapses in heartworm preventive administration.

“The need for heartworm prevention is more important than ever. Prevention continues to be one of the most important recommendations veterinary practitioners can recommend for patient care, and avoiding gaps in year-round prevention is essential,” Dr. Duke concluded.

Veterinarians seeking guidance on adapting protocols for heartworm prevention, testing and treatment during the COVID-19 crisis can access the AHS’recommendationson heartwormsociety.org.

About the AHS
Founded during the Heartworm Symposium of 1974, the American Heartworm Society (AHS) aims to further scientific progress in the study of heartworm disease, inform the membership of new developments and encourage and help promote effective produces for the prevention, diagnosis and treatment of heartworm disease.

American Heartworm Society Announces Program Details for 17th Triennial Heartworm Symposium
Early registration for September 8-11 th conference in New Orleans ends July 15th...
Preventing Heartworm Disease in Dogs
April is National Heartworm Awareness Month! To make sure all dogs are protected from this serious...
The Invisible Threat to Your Pet: How to Prevent Heartworm Disease
EDWARDSVILLE – As social distancing restrictions continue to lift and the weather finally starts...
Paola Domínguez-López on the importance of embracing change
Paola Domínguez-López has always been passionate about animals. Her big dream as a child was to be...
Vector-borne diseases likely a higher risk this year
The Companion Animal Parasite Council recommends pets be tested annually and protected year-round...
7 Essential Reasons Every Cat Needs an Annual Vet Exam
Cats are known to have a penchant for biting and scratching, but even the most fierce feline can...
How heartworm affects household pets
Pets are beloved members of many families. So it’s no surprise that so many pet owners place such...
Dogs at higher risk of contracting heartworm disease from mosquitoes in OC, officials say
GARDEN GROVE, Calif. (KABC) -- The chances of dogs catching heartworm disease in Orange County are...
The Pandemic Effects on Heartworm Prevention
"At the beginning of spring 2020, many veterinarians saw a drop in wellness visits and heartworm...
Veterinary Treatment Facility reminds pet owners of heartworm disease risks
Heartworms are a serious and potentially fatal disease that mainly affects dogs, cats and ferrets....
Heartworm cases on the rise this time of year
Experts say prevention starts now Heartworm can be turn into a deadly disease if not treated...
Veterinarians need to stress year-round mosquito control
While heartworm is a serious and potentially deadly disease, it is, fortunately, also preventable...

RT @AHS_Think12: What do you do when your patient's heartworm preventive history is murky? UGA parasitologist Dr. Andy Moorhead takes a ca…

RT @AHS_Think12: An ounce of prevention is worth a pound of cure! https://t.co/UXa7i7rzCk